Emily has been busy promoting The Falcon and The Winter Soldier the past week!

On Monday, Emily participated in an Instagram Live with Entertainment Weekly. The video was finally posted today to their official YouTube channel. You can watch it below.

Two other new video interviews by ET Canada and CinePOP were also released. Check them out.

S.
Comments Off on Emily VanCamp teases the mystery of Sharon Carter

Is Sharon secretly working for the elusive Power Broker?

Warning: Spoilers from The Falcon and the Winter Soldier season 1, episode 3 are discussed in this article.

There’s more to Sharon Carter than meets the eye. A lot more.

Emily VanCamp returned to her Captain America movie role in The Falcon and the Winter Soldier’s third episode, which revealed the former S.H.I.E.L.D. agent has been living under the radar in Madripoor after she was forced to go on the run from the U.S. government in Civil War for illegally aiding Steve Rogers (Chris Evans), Sam Wilson (Anthony Mackie), and Bucky Barnes (Sebastian Stan).

She’s since made a life for herself in this neon-soaked city filled with all manner of criminals, which formed her new outlook. As VanCamp tells EW, she’s no longer the “young and idealistic” agent who “committed her whole life to the cause and the government.” She now believes “the whole superhero thing is a joke.” But that may not be all she believes.
END_OF_DOCUMENT_TOKEN_TO_BE_REPLACED

Why Carter’s Punishment By U.S. Govt Doesn’t Fit The Crime

S.
Comments Off on Why Carter’s Punishment By U.S. Govt Doesn’t Fit The Crime

Warning: This interview contains spoilers from The Falcon and the Winter Soldier Episode 3, “The Power Broker.”

Agent Sharon Carter, we hardly knew thee, is essentially what it boils down to after seeing Captain America’s former flame show up in Episode 3 of Disney+/Marvel’s The Falcon and the Winter Soldier.

While still showing an ability to get a guy out of tricky situation — similar to how she saved Captain America in his second movie, she saves Sam Wilson and Bucky Barnes from a bunch of bounty hunters several times over in Episode 3– Carter is a little jaded; on the run from the U.S., hiding out in the Pan Pacific island city of Madripoor.

“So much has changed. Everything that used to motivate Sharon Carter is no longer. That’s pretty evident in Episode 3 off the bat, when we see her. Clearly Sharon’s been through it, and isn’t too happy about that. So whatever was driving her before, that loyalty to the government and to Cap, that sort of wide-eyed agent feeling that she gave off, it’s pretty stripped away at this point,” actress Emily VanCamp told Deadline today.

END_OF_DOCUMENT_TOKEN_TO_BE_REPLACED

SPOILER WARNING: This story discusses events from Season 1, Episode 3 of Disney Plus’ “The Falcon and the Winter Soldier.”

The last time Emily VanCamp appeared in the Marvel Cinematic Universe as former S.H.I.E.L.D. agent Sharon Carter, she was illegally aiding Steve Rogers (Chris Evans) in 2016’s “Captain America: Civil War” — and stealing a kiss from him for good measure. Sharon’s actions force her to go on the run; she doesn’t return for either “Avengers: Infinity War” or “Avengers: Endgame.” VanCamp never expected she’d appear in the MCU again.

While shooting the Fox medical series “The Resident,” however, the 34-year-old got a call asking if she was interested in reprising Sharon Carter in the Disney Plus series “The Falcon and the Winter Soldier,” starring her “Civil War” compatriots Anthony Mackie (as Sam Wilson) and Sebastian Stan (as Bucky Barnes).

“Marvel, when they call, you always answer,” VanCamp says.

In 2014’s “Captain America: The Winter Soldier” and “Civil War,” Sharon is an idealistic young agent who is always keen to do the right thing — she’s the niece of S.H.I.E.L.D. (and Marvel) legend, agent Peggy Carter, after all. But when we meet her again on Episode 3 of “FAWS,” titled “Power Broker,” Sharon is a changed woman. She thinks nothing of gunning down a series of goons when she swoops in to Sam and Bucky’s rescue in the (fictional) lawless island nation of Madripoor, where Sharon’s been holed up since “Civil War.” She scoffs at Sam’s idealism, telling him, “You know the whole hero thing is a joke, right?” She lives in a posh penthouse that doubles as a showcase for major stolen art. And she is curiously well-connected within Madripoor’s network of villainy, so much so that some began to speculate that Sharon could be the as-yet-unidentified Big Bad of the season, the Power Broker.

Understandably, VanCamp couldn’t outright spoil whether Sharon is indeed the mastermind behind the sudden proliferation of super soldiers on “FAWS.” But she did have some revealing insights into her character, as well as what it was like to return to the MCU after so many years away.

END_OF_DOCUMENT_TOKEN_TO_BE_REPLACED

Emily was on the US morning show Good Morning America earlier today to promote “The Falcon and The Winter Soldier”. Episode 3 (“Power Broker”) is out today on Disney+ and spoiler alert: Sharon is back! Watch Emily discuss the show and more below.

S.
Comments Off on Upcoming Appearance: “Good Morning America” on 4/2 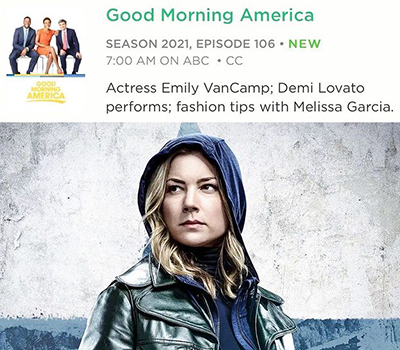 Emily will be a guest on Good Morning America on Friday, April 2nd to promote “The Falcon and The Winter Soldier”. The show airs weekdays from 7 AM to 9 AM ET on ABC. If you’ve seen the first two episodes of TFATWS so far, you’ll know that Emily’s character, Sharon Carter, has yet to appear. However, with Em scheduled to do press, it’s a good chance that Sharon will show up in episode 3. Fingers crossed she does!
"Revenge"

Missed the Revenge Reunion that took place live on Sunday, March 21st? No worries! The organizer uploaded the video of the entire virtual event onto their website. Check it out by clicking the graphic above. Enjoy!

Get excited, Revengers! We’re so close to the virtual Revenge Reunion. Click the link below to watch tonight for FREE at 4 PM PT / 7 PM ET. If you’re an international fan, check your time zone to make sure you have the correct time. As a note, the U.S. recently had Daylight Savings. Alright all, see you there!

"The Falcon and the Winter Soldier" • Media

Hi, everyone! If you missed the virtual launch event for “The Falcon and The Winter Soldier” that premiered earlier today, don’t worry. The video is available for playback on the official Marvel YouTube channel. I’ve embedded it below for easy access. Emily comes in around the 11:27 minute mark.

I’ve also added 170 screen captures of Emily from the event to the gallery:

S.
Comments Off on Get ready! “TFATWS” Launch Event TOMORROW 3/18!

Tune in here this Thursday at 9amPDT/12pmEDT for a Virtual Launch Event featuring the cast of Marvel Studios' The Falcon and The Winter Soldier! #FalconAndWinterSoldier pic.twitter.com/W0JfUm5ZGm