“The Girl in the Book has sold to Myriad for International Distribution!”

Shirph
Comments Off on “The Girl in the Book has sold to Myriad for International Distribution!”

This may be old news to some of you, but if it’s not, then great!

For international fans of Emily, you may be able to see her film, “The Girl in the Book”, sooner than you think!

Kirk D’Amico and his team will introduce international buyers in Toronto to the thriller starring Emily VanCamp and Michael Nyqvist.

The Girl In The Book premiered at the Los Angeles Film Festival over the summer and takes place in the cutthroat publishing world where a junior book editor must face personal demons and find the courage to write her own novel.

Hey guys! I apologize for the brief downtime but my previous host closed unexpectedly and I had to find a new host for the site. We are now part of the Flaunt Network! There may be some broken links and/or images but please bear with me as I try to fix everything asap.

Also, as of several days ago, principal photography on Captain America: Civil War has completed. The film is slated to release next year on May 6th, 2016. As you Emily fans know, she will be reprising the role of Agent 13, who was first introduced in Captain America: The Winter Soldier back in 2014.

“The Girl In The Book” Official Movie Poster

Check out the official poster for The Girl in the Book below and remember that the film premieres at LA Film Festival this week so be sure to get your tickets !!! 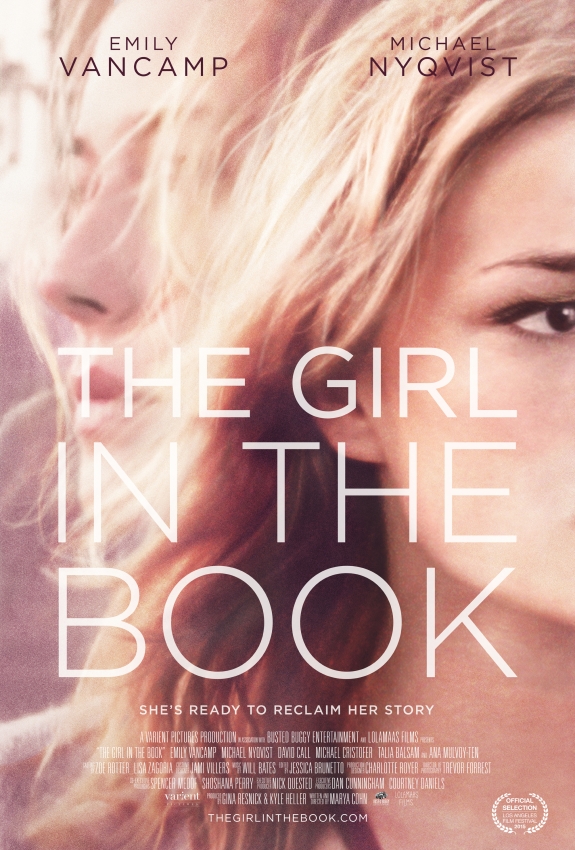 “It’s Premiere Week! Get your tickets for The Girl in the Book.” 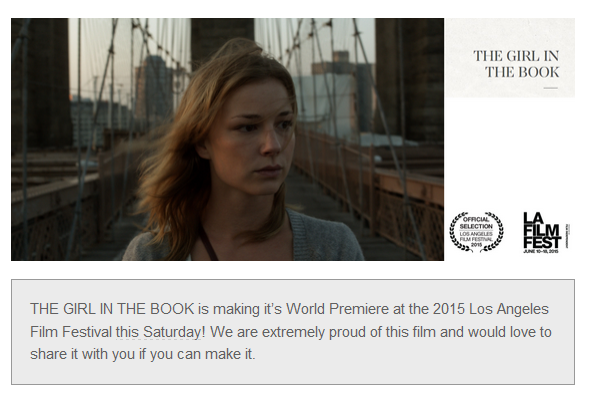 I got this email today since I’m subscribed to Busted Buggy Entertainment. Oh how I wish I lived in LA! If any of our lucky visitors are in LA or the surrounding area, be sure to check out the LA Film Festival and watch the premiere of Emily’s latest film, The Girl in the Book.

These are the two scheduled dates the film will show and the theater location number:
Jun 13 2015 3:40 PM
Regal Cinemas L.A. LIVE 11

To buy tickets, go to this page and pick which showing you plan on attending! If you do go, I hope you enjoy! Hopefully the film will be hitting other festivals and cities soon.

Can’t believe Revenge is ending tomorrow for good. I added the edited version of the following interview Emily did with Entertainment Weekly to the gallery. It is in the newest issue of Entertainment Weekly [May 15, 2015] which is on stands now. (If you get the issue and it seems different it’s because I got it from the digital issue)

With the series finale airing Sunday, we look back (and forward) with the primetime soap’s 29-year-old star.

To say that a lot’s happened on Revenge would be an understatement. The scorching-hot show about a dish best served cold saw Emily VanCamp spend four years as Amanda Clarke as Emily Thorne, plotting and scheming and pursuing her complicated agenda against the mighty Grayson family. And with the show ending Sunday, May 10, at 10 p.m. ET, Emily—VanCamp, that is, not Thorne—talked to EW about ending the series after four seasons, handling her character’s final moves (no, she’s not telling whether she survives the show), and gearing up for her next project: Captain America: Civil War.

ENTERTAINMENT WEEKLY: What was it like filming your final scene? Did you know by then that it would be your last one for the show?
EMILY VANCAMP: My last scene was with Gabriel [Mann] and Nick [Wechsler], and they’re two of my very, very close friends. At that point we weren’t completely sure, which is kind of a bummer because it would have been nice to know that we were playing these characters for the last time—they’re so special to us. But at the same time, it’s almost nice that we didn’t know because it would have been almost unbearable to get through.

What were your thoughts when you heard this would be the series finale?
Well, it had been talked about a lot over the course of this season because we all knew, at a certain point, [Emily] has to get her revenge. So it was always a discussion as to how many episodes we could actually draw out of this story without disrespecting the fans and drawing it out so long that it becomes uninteresting, you know?

I think we did a really fantastic job of wrapping up the story within four seasons, and it just sort of felt like, well, if we come back, it’s going to have to be something totally different. I’m kind of happy that ABC allowed us to end this thing without keeping us in limbo. It’s a much nicer way to end.

So four seasons felt like enough?
Four years is a wonderful amount of time to do a TV show. Four’s been my lucky number: [I did] four seasons of Everwood, of Brothers & Sisters, of Revenge. You don’t have time to get sick of it, but you get to really flesh out these characters and develop them over a long period of time. I was always really happy with four.

What did you and the cast do when you found out? Did you call up Gabriel and Nick?
Oh yeah, we have several group feeds going, so you know, sending pictures of seasons 1, 2, and 3 back and forth. I think Gabriel sent 20 pictures to us. [Laughs] We were definitely going through the emotions of it all, but I think it’s bittersweet.

Do you think the finale will provide closure for fans?
Yeah, I do. I’ll put it this way: I think they’ll be satisfied. I think a couple of things happen that they’ve been waiting for for a long time. In the grand scheme of Revenge, I feel like we exhausted all of the different story possibilties. I think we’re ending in a good place, and I think it’s time to move on, as sad as that is.

END_OF_DOCUMENT_TOKEN_TO_BE_REPLACED

Emily to return as Agent 13 in “Captain America: Civil War”

Shirph
Comments Off on Emily to return as Agent 13 in “Captain America: Civil War”

Great news! Deadline has reported that Emily will be back in the next installment of Captain America, titled Captain America: Civil War. The film will be released on May 6th, 2016.

EXCLUSIVE: In the wake of Revenge ending its four-season run on ABC, sources tell Deadline that actress Emily VanCamp is returning as Agent 13 aka Kate aka Sharon Carter in Walt Disney Marvel’s Captain America: Civil War.

Agent 13 appeared briefly in Captain America: Winter Soldier as the superhero’s next door neighbor under the alias of Kate. She is ordered by S.H.I.E.L.D. to protect him. Her storyline in Civil War is under wraps. In the comics, Sharon is the niece of Peggy Carter, Captain America’s love interest in the first feature installment, who also had her own miniseries on ABC, Agent Carter, earlier this year. The films have not yet established that Agent 13 is Sharon Carter, though she is known as such by legions of Marvel fans. VanCamp is repped by United Talent Agency and Thruline Entertainment.

Captain America: Civil War opens on May 6, 2016 and is being directed by Anthony and Joe Russo who also helmed Captain America: The Winter Soldier. VanCamp is also starring in the indie feature The Girl In The Book from director/writer Marya Cohn. The final episode of Revenge “Two Graves” airs this Sunday.

Shirph
Comments Off on Promo for Revenge 4.23 (Series Finale)

The series finale of Revenge airs this upcoming Sunday. Watch the promo below:

Some of you may remember the Kickstarter campaign for The Girl in the Book, the indie film Emily starred in and filmed a few summers ago in New York City after being fully funded. The project sent backers an update on the film earlier today. Here it is below:

We are pleased to announce Marya Cohn’s The Girl in the Book, starring Emily VanCamp​ & Michael Nyqvist, is an Official Selection of Film Independent​’s Los Angeles Film Festival 2015!

We will keep you posted with updates and screening times. We are planning to send out rewards over the next few months!

Thank you all for your patience!

– The Girl in the Book Team

The film has been in post-production for awhile and I’m glad to hear that it is hitting up the festival market now. I will keep you guys posted on any new updates pertaining to the film! If you’re lucky enough to be able to attend, I highly recommend doing so.

Unfortunately, Revenge has been officially canceled by ABC. It shouldn’t come to a surprise to anyone who’s watched this season, though, especially the last several episodes. From Emily revealing she was Amanda to that recent episode with flashbacks of past takedowns, it seems the time in the Hamptons was coming to an end soon. Entertainment Weekly got the exclusive interview with executive producer Sunil Nayar. You can read it below.

Emily Thorne’s quest for vengeance is over: Revenge will end its run after four seasons, EW has learned exclusively.

The upcoming finale, slated to air Sunday, May 10, at 10 p.m. ET on ABC, will serve as the end of the series. “We can officially tell our fans that this will be the end of the story,” executive producer Sunil Nayar tells EW. “We’ve been talking to the network and we all just wanted to make sure that we felt very confident. Now that everybody has seen the finale—which is fabulous—everybody understands that as much as we all adore the show, it has hit exactly the mark it needed to to end. This is the series finale of Revenge that will be airing in a couple weeks.”

END_OF_DOCUMENT_TOKEN_TO_BE_REPLACED

Two sneak peeks are out, remember to watch Revenge tomorrow on ABC 10|9c.