The Sharon Carter episode of Marvel Studios: Legends has been officially released on Disney+! It dropped earlier today, March 12th. The show recaps certain character histories in the MCU. This week, episodes for Sharon and Zemo were released. Sharon joins the ranks of Falcon, The Winter Soldier, Wanda Maximoff and Vision, whose episodes were released prior to today.

“LEGENDS recounts how Agent Sharon Carter risked all for Steve Rogers, doing what she knew was right.”

If you have Disney+, follow these instructions:
1) Go to the Marvel section
2) Scroll down to Marvel Live Action Series and Specials
3) Click on Marvel Studios: Legends
4) The Sharon special is episode 6. Enjoy! 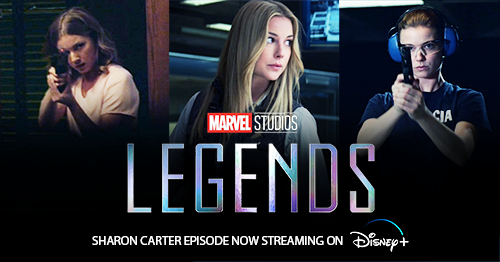