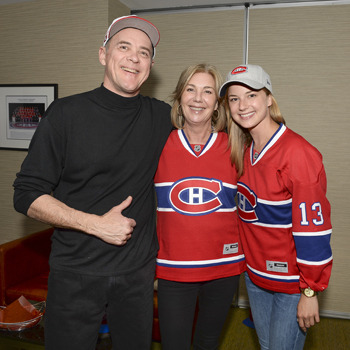 Does a background in dance help with your acting career, considering a lot of your roles are so physical?

EV: Dancing helps with fight choreography, which is a big part of what I’ve been doing recently. I also had to wear these slim, tall dresses on Revenge. You have to have a certain elegance and poise for those types of roles, and ballet teaches you how to hold yourself and how to stand tall. I think for that reason dance was beneficial for my career, but it can also be both mentally and physically tough. Dance is probably one of the toughest disciplines to study. I am always in awe of their commitment. I didn’t love dance enough to push me to that place, but I do love acting enough to push myself there.

Is dance still a big part of your life?

EV: It is not directly part of my life anymore, I stopped dancing a very long time ago and I’m happy with that decision. But I think it has informed a lot of what I do today. It is such a rigorous and difficult training process, so it can help with anything from work ethic to posture. I am really grateful for how it helped shaped me into the person I am today, but do I still dance? No, not my thing.

In Revenge, your character wasn’t exactly a sweetheart; how hard was it not to take your work home with you?

EV: I call it an emotional marathon for me. It’s portraying heightened emotion at a heightened level, for a period of four years. To me, if you can do that, you can tackle anything. I knew it was going to be hard to play such a tortured girl for potentially four seasons, but now that it’s over, I just feel so fulfilled and so grateful for the experience. Even with all of the difficult nights coming home when I felt like I couldn’t let the character go, I have to be honest, when they finally said it was over, I still had that feeling in the pit of my stomach. That to me is symbolic of a great experience. As actors we just beat ourselves up emotionally; it’s part of the gig. The experience just enriched my life so much that I am absolutely better for it.

What has it been like to see some of the idols your worshiped growing up turn into your colleagues – like acting in episodes of Revenge directed by Helen Hunt?

EV: Helen was one of the big ones because I grew up watching all of her movies and all of her TV shows. When I started acting I always had this dream of playing Helen Hunt’s daughter. My mom and I used to talk about it jokingly. And then they just came up to me one day and said: “Helen Hunt is directing one of the episodes of Revenge.” It just blew my mind. And by the way, she exceeded all expectations. In terms of who she is as a woman and what she represents, it was hugely inspiring for me. She directs, she writes, she stars in her own movies. I went to the premiere for her movie Ride she did and was incredible in. You work with some women who teach you everything you don’t want to be – and I’ve had maybe one or two of those – and I’ve had like 20 women teach me everything I wanted to be and she was certainly one of them. I’ve worked with some extraordinary women and I’m blessed for that.

When you look at how far you’ve come in your career, do you still pinch yourself sometimes?

EV: The last season of Revenge was my 12th –and-a-half season on TV, pretty much consecutively. That’s been a big chunk of my life. I’ve been acting since I was 15 years old. It’s been amazing. I have been so unbelievably fortunate. I think there is also a certain amount of luck to it. So I think it’s important to always work your hardest and take advantage of opportunities. A big thing that I’ve learned over the years is that when I look back on it I’m so happy that I took the risks that I’ve taken. There’s always that moment where you’re asking yourself if you want to go through with something and I think every time I took the risk, it paid off. For me it’s just about keeping doing that and keep succeeding and failing, succeeding and failing and that’s what makes a career. I’m excited for this new phase. I don’t think I’ll be doing network TV for a while. It’s been so good to me, but now I want to have the time to try other things. I just feel like I’m in such a happy, exciting place. I think four years on Revenge was the perfect amount of time for the story to be told. We got to let it go on a high note.

How much of a comic book nerd were you prior to landing your first Marvel movie?

EV: I never was until I did Captain America: The Winter Soldier. That changed everything. I remember they presented me with this Sharon Carter bible containing everything she’s ever been in. That’s when I realized how serious this stuff was and how seriously I needed to take it. I started researching everything and actually fell in love with the character and the relationship she has with Cap. Of course I am going to support Marvel. Everything they touch turns to gold. It’s incredible how skilled they are at making films. It was a nice segue to go from Revenge to Marvel. As for what I can say about the future of my Marvel character, let’s just say they’ll kill me if I say anything. (laughs)

You’ve attended Comic-Con events in the past. Does the passion fans have for Marvel and Captain America still surprise you sometimes?

EV: I would have to say that the commitment of the people at Comic-Con is very similar to what you get with Canadiens fans. They know what they are talking about and they are so passionate and knowledgeable. It kind of takes your breath away a little bit, just like when I’m at the Bell Centre. They are so dedicated that it’s fascinating. I love it.

What was it like to interact with some of the more ‘dedicated’ Comic-Con fans?

EV: It’s less with me than some of the other actors. When Chris Evans walks in, you can tell that his character has inspired so many people. You see these kids that are just like so emotional and it just means so much to them which is wonderful to see. For me, I’m quite new. I went a couple years ago and it was a new experience for me. But I loved it. I think anyone wants to have their work validated and feel like you have a purpose. That kind of experience really pushes it over the edge.

EV: Right now I’m really trying to focus on hanging out with my friends and things like that that you don’t have as much time to do when you’re working a heavy schedule. I also love outdoor activities like fishing and camping. I haven’t been able to do any of that stuff for a while. And poker; I love my poker. I don’t watch poker on TV or anything but I love to play with my friends. I’ve played for years. It will also be nice to spend some time in the kitchen and kind of just be a home-body again.