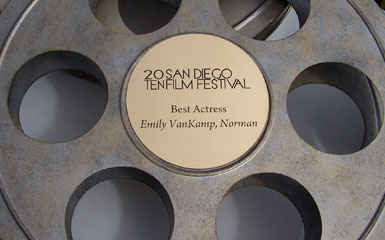 Norman screened at the 2010 San Diego Film Festival over the weekend. Hopefully some of you had a chance to attend a screening. Having already seen it myself, I can tell you Emily is simply fantastic in it. And apparently the judges at the San Diego festival agree with me on that, as they gave Emily the festival award for Best Actress for her performance in the film! Unfortunately, as you can see above, they spelt her name wrong on the trophy. D’oh! I’m sure Em will probably get a laugh out of that though. Or they’ll at least fix it for her. She wasn’t there to accept it, but you can still watch the award announcements below if you want. The award for Best Actress is the second one announced.

Also, ‘Norman’ will be screening at the upcoming Chicago International Film Festival. Screenings are scheduled for October 8th, 17th and 19th. If you happen to live in the area and you want to attend one of the screenings, you can visit the festival’s official website for ticket and venue information.