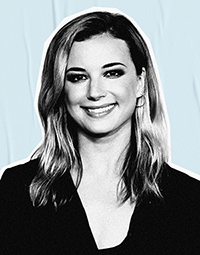 With ‘The Falcon and the Winter Soldier,’ the actress adds another sure-to-be smash to her resume.

VanCamp never expected to be a part of the Marvel Cinematic Universe. “I came into the process very late in the game — I don’t think anyone thought of me,” she recalls of her first audition for Captain America: The Winter Soldier, back in early 2013. “To me, it was a long shot and I didn’t think it was going to happen. Then I got the call that they wanted to move forward with me, and I was just delighted.”

It’s been eight years, and 14 Marvel movies, since. On Friday, the actress will reprise her role as Sharon Carter for the third time in the new Disney+ series, The Falcon and the Winter Soldier, Marvel’s second foray into streaming series, following this year’s smash hit Wandavision. The show will be Carter’s first appearance in the MCU since 2016’s Captain America: Civil War, and picks up where we last found the S.H.I.E.L.D. agent: on the run.

Speaking over the phone a few days before the show’s premiere, VanCamp says that she first got the pitch for the show back in 2019. “The answer is always yes,” she says. “[With MCU], you’re not sitting around holding your breath, because there are so many moving parts, especially with streaming now. You never know where they want to slot you in to these big stories and ideas. It’s always fun when you do get the call.”

“It’s bananas,” she continues. “It’s like the gift that keeps on giving. These characters are so much fun, and everyone involved is incredible. You feel like you’re a part of this big ol’ family.” As a veteran of the franchise, VanCamp is well-versed in the act of talking about her latest project without talking too much about her latest project. Here’s what she can share for now: “This time around we get to see another side of her, and that made it even more interesting,” she says. “Sam and Bucky are characters that are really loved in the universe but never got that much screen time, so exploring their relationship and dynamic is really nice to watch.”

While her co-stars Sebastian Stan and Anthony Mackie may have had the advantage of playing their characters more recently than 2016, by transitioning to TV, VanCamp had something of a home court advantage; starring in hit TV shows is something of her speciality, having played the lead in everything from the cult classic teen drama Everwood to ABC prime time hits Brothers & Sisters and Revenge.

VanCamp’s reign as TV’s MVP is still going strong; while shooting The Falcon and the Winter Soldier, she was simultaneously filming her medical drama The Resident, both of which shot in Atlanta. “There were nights that I would shoot nights on Winter Soldier and go straight into The Resident,” she recalls. “It was a challenge, to say the least, but it was worth it and one of those times where you hang on tight and hope that you can deliver.” What’s more, COVID-19 delayed both productions, only intensifying shooting schedules, as well as the pressure to do right by the medical professionals she was portraying on The Resident. “I’ve always had an insane amount of respect for medical workers,” she says. “Playing a character in that field, you see how much goes into it and how many sacrifices are made. You add in a pandemic and you realize these are our real-life heroes. It made it that much more of an honor to portray one of them.”

In the days leading up to The Falcon and the Winter Soldier’s premiere, her schedule was no less hectic: throughout the week, she was filming The Resident, and come the weekend, had the ten year reunion of Revenge to shoot. That much she was still wrapping her head around. “When they said ten years, I was like, ‘That’s not possible.’ I actually cannot believe it,” she says. “It goes to show that people really like what we did with those characters and those stories. That was a really special time. It’s delightful when people still remember work you did years ago.”